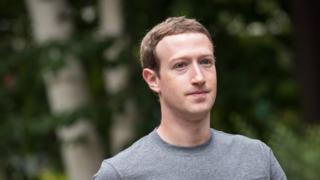 Facebook CEO Mark Zuckerberg has vowed to "fix" Facebook, in what he described as his personal challenge for 2018.

In a post on his page on the social network, he said it was making too many errors enforcing policies and preventing misuse of its tools.

Mr Zuckerberg has famously set himself challenges every year since 2009. Facebook launched in 2004.

Social media firms have come under fire for allowing so-called fake news ahead of US and other elections to spread.

Facebook in particular has been criticised for allowing Russia-linked political ads in the run-up to the 2016 US presidential vote.

Mr Zuckerberg said he intended to focus on "important issues", which he listed as "protecting our community from abuse and hate, defending against interference by nation states, or making sure that time spent on Facebook is time well spent".

"We won't prevent all mistakes or abuse, but we currently make too many errors enforcing our policies and preventing misuse of our tools," he wrote.

"If we're successful this year then we'll end 2018 on a much better trajectory."

The Facebook CEO said he would learn more by looking intensely at those issues than by doing something completely separate. In the past his New Year resolutions have included wearing a tie every day and killing his own food.

But critics questioned why he needed to make a yearly challenge of these issues.

"Zuckerberg's 2018 personal challenge for himself is…doing the work he should be doing as Facebook CEO anyway," tweeted tech writer Maya Kossoff.

zuckerberg's 2018 personal challenge for himself is…doing the work he should be doing as facebook CEO anyway https://t.co/NRzpnfdYyl pic.twitter.com/kf7IJrrvfJ

Technology had the promise of putting more power into people's hands but many people had now lost faith in that promise and thought technology actually centralised power, he said.

Mr Zuckerberg added that encryption and digital currency had the power to counter this trend, and said he would explore how to use them at Facebook.

"This will be a serious year of self-improvement and I'm looking forward to learning from working to fix our issues together," he concluded.

IcetruckJanuary 4, 2018
Like story:
tweet
‘Game of Thrones’ Officially Confirmed to Return in 2019
US ‘to crack down on legal cannabis’