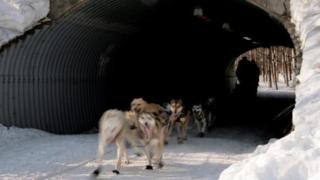 Alaskan sledge-dog racing champion Dallas Seavey has been named by officials of the famous Iditarod Trail race for having four dogs which tested positive earlier this month for drugs.

The dogs were found to have traces of the opioid pain reliever Tramadol.

It is the first time dogs have allegedly been found to be using a prohibited substance since testing in the race began in 1994.

The Iditarod Trail Sled Dog Race is an annual event that takes place through some of Alaska's most remote areas between Anchorage and Nome.

Reports of the positive test are a major blow to the integrity of the world famous race, the New York Times commentated.

Seavey was named following an emergency meeting of the Iditarod Trail Committee (ITC) on Monday.

"Because of the level of unhealthy speculation involved in this matter, [the] ITC has now decided to disclose the name of the musher involved," it said in a statement. Dog racers are colloquially known as mushers in Alaska.

The committee ruled that Seavey would not be disqualified from next year's race and would not face any disciplinary action because of what it said was an "ambiguous rule" that made it incumbent on them to establish the musher's intent.

But Seavey, after his name was made public, announced he had withdrawn his name from the race to protest against the allegations being made against him.

He has claimed the drugs may have been given to his dogs maliciously as an act of sabotage and that it would be "plain stupid" for him to give illegal substances to them when he knew they would later be subjected to mandatory testing.

He described the proceedings against him as a "a cancer" on the sport.

"I have never knowingly broken any race rule," he said in his 17-minute-long YouTube video. "I have never given any banned substance to my dogs."

"They can try to throw me under the bus, but I'm going to be honest to myself," he said, "and they're going to find out I don't fit under the bus."

He also argued that Tramadol would not necessarily have given his dogs a competitive advantage.

Who is Dallas Seavey?