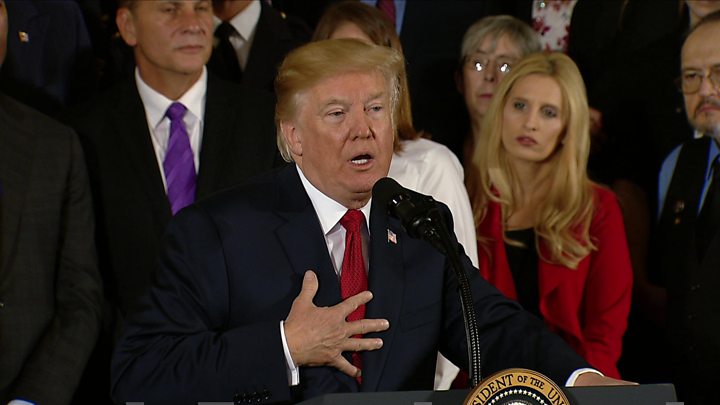 US President Donald Trump has called America's painkiller-addiction crisis a "national shame" as he declared it a public health emergency.

Mr Trump announced a plan to target the abuse of opioids, which kill more than 140 Americans each day.

The president has previously promised to declare a national emergency, which would have triggered federal funding to help states combat the drug scourge.

Mr Trump said on Thursday at the White House: "More people are dying from drug overdoses today than from gun homicides and motor vehicles combined.

"These overdoses are driven by a massive increase in addiction to prescription painkillers, heroin and other opioids."

He added: "The United States is by far the largest consumer of these drugs using more opioid pills per person than any other country by far in the world."

Mr Trump signed a presidential memorandum directing his acting health secretary to declare a nationwide public health emergency and ordering all federal agencies to take measures to reduce the number of opioid deaths, according to senior White House officials.

Proponents suggest Mr Trump's announcement is a critical step in raising awareness about the nationwide epidemic, while some critics argue the move does not go far enough.

Senator Bernie Sanders later tweeted that while Mr Trump was "right that the opioid crisis is a national emergency", Friday's announcement was "nothing more than an empty promise".

"Millions depend on Medicaid [healthcare funding] for opioid treatment. Trump's solution is to cut Medicaid by $1 trillion. That is a disgrace," wrote the Vermont senator.

Addiction to painkillers and heroin has blighted so many communities across the US – both urban and rural.

IcetruckOctober 26, 2017
Like story:
tweet
Amazon and Alphabet report sales surge
Researchers Reveal 5 Secrets of People Who Have Lived to Be 100