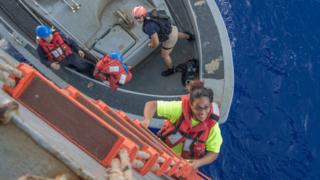 US sailors rescued after five months adrift in Pacific

Two US yachtswomen and their two dogs have been rescued by the US Navy after spending nearly five months adrift in the Pacific Ocean, officials say.

Jennifer Appel and Tasha Fuiaba say they set off in a small sailing boat from Hawaii bound for Tahiti when their engine, damaged by bad weather, failed.

Their boat then drifted in the open seas about 1,500km (930 miles) southeast of Japan, they said.

They were rescued after a fishing vessel alerted US authorities.

The pair said they set off in May and their engine broke at the end of that month.

They originally thought they would be able to reach land by relying on wind and sails, the US Navy's Seventh fleet said in a statement.

"Two months into their journey and long past when they originally estimated they would reach Tahiti, they began to issue distress calls," the statement added.

The US Navy said the two women continued with the calls daily, but that their signals were not picked up because they "were not close enough to other vessels or shore stations".

"It was very depressing and very hopeless, but it's the only thing you can do, so you do what you can do," she said.

But on 24 October, a Taiwanese fishing vessel spotted their 50ft (15m) boat called the Sea Nymph bobbing in the ocean and contacted authorities on the US territory of Guam.

The USS Ashland, which was in the area, arrived early the following day to rescue the sailors – both from Honolulu – and their canine companions Valentine and Zeus.

They said they managed to survive the ordeal thanks to a water purifier and more than a year's worth of dry goods such as oatmeal and pasta.

In a conference call with reporters while onboard the Navy ship, they described feeling like "sharkbait" and wondering if each day would be their last.

"We had survived two different shark attacks and with both of them we thought it was lights out, and they were horrific," said Ms Appel, claiming that a group of seven 30ft-long sharks slapped their tails on the hull of the ship one night.

"They saved our lives," Ms Appel said of the US Navy.

"The pride and smiles we had when we saw them on the horizon was pure relief."

IcetruckOctober 27, 2017
Like story:
tweet
10 kids that have Realized They’re Parents Were cooler Than They are
Headscarf row: German university lecturer ‘humiliates’ Muslim