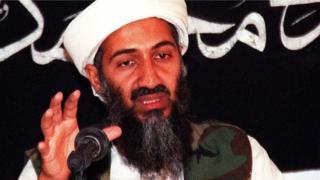 The new material includes his personal diary, documents and audio and video files – including a clip showing his son Hamza as an adult, at his wedding.

It is the fourth release by the CIA of material found in the raid on Bin Laden's Pakistan hideout in Abbottabad.

Some material has been withheld because it could harm national security, the US intelligence agency says.

"Today's release of recovered al-Qaeda letters, videos, audio files and other materials provides the opportunity for the American people to gain further insights into the plans and workings of this terrorist organisation," CIA Director Mike Pompeo said in a press release.

According to the CIA statement, the documents "provide insights into the origins of fissures that exist today between al-Qaeda and ISIS [Islamic State group]" as well as "strategic, doctrinal and religious disagreements within al-Qaeda and its allies".

The new material released on Wednesday also showed the terror network's efforts to exploit the Arab Spring uprisings, and its attempts to improve its media image, the CIA added.

A computer seized during the raid contained files of Hollywood movies, kids' cartoons as well as three documentaries about Bin Laden himself.

Among the video files is also a wedding video of Bin Laden's son, showing rare footage of Hamza Bin Laden as a young adult. Hamza Bin Laden is now in his 20s, although his exact whereabouts are unknown.

Previous documents released had suggested that Bin Laden had been grooming his son to succeed him as al-Qaeda leader.