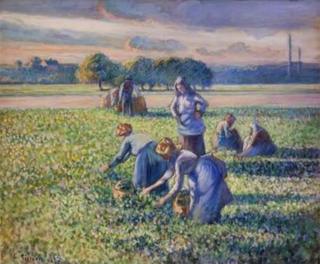 A French impressionist painting looted by the Nazis during World War Two has been restored to the Jewish family that once owned it.

A court in France ruled that it belonged to the descendants of Simon Bauer, an art collector.

Picking Peas was painted in 1887 by Camille Pissarro.

In 1943, it was confiscated under anti-Semitic laws passed by the collaborationist Vichy government during the German occupation of France.

Bauer, survived the war, but only because a strike by railwaymen stopped a train taking him to a concentration camp.

Bauer's descendants started their legal bid to retrieve the painting earlier this year when the Tolls lent it to the Marmottan museum in Paris.

Last May a court granted their request to have the 1887 painting impounded pending a ruling on its on ownership.

Mr and Mrs Toll said they had bought the painting in good faith.

"My clients will be very disappointed not to be able to retrieve this painting, they were very attached to it. They will certainly appeal," the couple's lawyer, Ron Soffer, said.

"They do not consider that it is up to them for pay for the crimes of the Vichy regime."

Other legal disputes over art and property looted by the Nazis from its Jewish owners have had similar outcomes, even if the new owners were not aware of its history when they bought it.