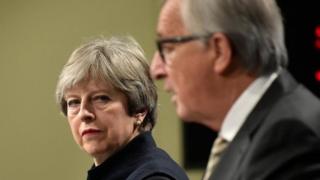 Brexit: Theresa May under pressure to get DUP on side

Theresa May is under pressure to get an agreement from the Democratic Unionist Party (DUP) on the status of the Irish border when the UK leaves the EU.

The prime minister pulled out of a deal with Brussels that would have kick-started trade talks after meeting fierce resistance from the DUP.

The party said it would not accept a deal which saw Northern Ireland treated differently from the rest of the UK.

Mrs May is due to update ministers at a cabinet meeting later.

The prime minister needs the support of the DUP, which is Northern Ireland's largest party and has 10 MPs at Westminster.

The Conservatives lost their Commons majority in June's general election and rely on a deal with the DUP to ensure they can survive key votes.

Mrs May is under pressure to get an agreement on EU divorce issues before European leaders meet on 14 December to decide whether to give the green light to start talks on post-Brexit trade.

The three issues that need to be resolved are the Irish border, citizens' rights and the amount of money the UK will pay as it leaves.

Talks with European Commission president Jean-Claude Juncker broke up without agreement on Monday, although both sides said they were hopeful of getting a deal by the end of the week.

Mrs May had been expecting to make a major statement to MPs about a breakthrough in Brexit talks on Tuesday, but that has now been cancelled.

Instead, it is thought she will hold meetings with the DUP, as she attempts to get them to support her.

The DUP objected to a clause in a draft agreement with the EU that would guarantee "regulatory alignment" between Northern Ireland and the Republic.

Ireland's Prime Minister Leo Varadkar is understood to have insisted on the clause to prevent the return of a "hard border" on the island of Ireland, amid concern it could undermine the 1998 peace treaty that brought an end to The Troubles.

But the DUP says it would prevent Northern Ireland from leaving the EU "on the same terms" as the rest of the UK.

Northern Ireland would effectively have remained in the EU's customs union and single market in all but name.

Scotland's First Minister Nicola Sturgeon said that if Northern Ireland was allowed to operate under different rules there was "surely no good practical reason" why other parts of the UK could not do the same – a message echoed by Welsh First Minister Carwyn Jones and London Mayor Sadiq Khan.

Leo Veradkar said he had been "surprised and disappointed" by the failure to get a deal on Monday and claimed the UK had changed its mind at the last minute after the DUP raised objections.

Downing Street has not responded to Mr Varadkar's claim.

But it said the Irish border was not the only outstanding problem and disagreement remains over the role of the European Court of Justice in overseeing EU citizens' rights in the UK after Brexit.

The prime minister is expected back in Brussels for further talks before the end of the week.

Sources declined to confirm reports that she would meet Mr Juncker and chief Brexit negotiator Michel Barnier on Wednesday.

The government's chief whip, Julian Smith, is understood to have held talks with his DUP opposite number, Sir Jeffrey Donaldson, on Monday evening, as efforts began to get the party on side.