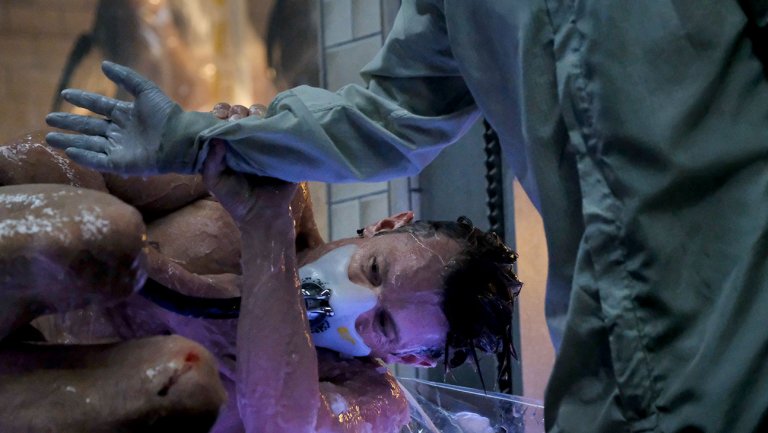 Joel Kinnaman stars in the futuristic drama, with the 10-episode first season bowing in February.

In the future, dying's as easy as putting on a new pair of jeans — at least that's how it looks based on the first trailer for Netflix's new sci-fi series Altered Carbon.

First ordered to series in January 2016, Netflix's new series (premiering in February) is based on the 2002 Richard K. Morgan novel of the same name, packed with a premise modern audiences might see as Westworld meets Blade Runner. In the world of Altered Carbon, which is set hundreds of years into the future, death is not the end, thanks to technology perfected by an organization called Psychasec. The first trailer for Altered Carbon begins with a commercial of sorts for the fictional product, pitching the concept of "human sleeves," as sold to elite consumers.

"Centuries ago, mankind found a way to transfer consciousness into a new body, making death a mere inconvenience," a soothing voice intones, as images of bodies with horizontal slits carved elegantly into the napes of their neck stand against glowing white backdrops. "Since then, we've been providing an unparalleled pedigree of human sleeves to only the most discerning clientele."

What begins as a calming glimpse into a future where cheating death is easy enough (assuming one has the wealth to transcend their mortal state) quickly descends into darkness, with quick cuts offering a look at a futuristic New York City, fluorescent lights on grimy city streets, an immaculately dressed bartender sipping a drink with one hand and casually holding a rifle in the other, and other assorted forms of gunplay and explosions aplenty.

Described by Netflix as "an intriguing story of murder, love, sex, and betrayal," Altered Carbon stars Joel Kinnaman as protagonist Takeshi Kovacs, an interstellar warrior who is revived after hundreds of years to solve a mystery. The role marks Kinnaman once again submerged in a life-after-death science fiction drama, having previously headlined the 2014 remake of RoboCop.

Additional stars include Dichen Lachman and Leonardo Nam of Dollhouse and Westworld fame, respectively — two other actors who know a thing or two about science fiction shows where actors can assume multiple roles, in other words. Laeta Kalogridis serves as executive producer and creator of Altered Carbon. The 10-episode first season arrives Feb. 2, 2018.

Watch the trailer below: