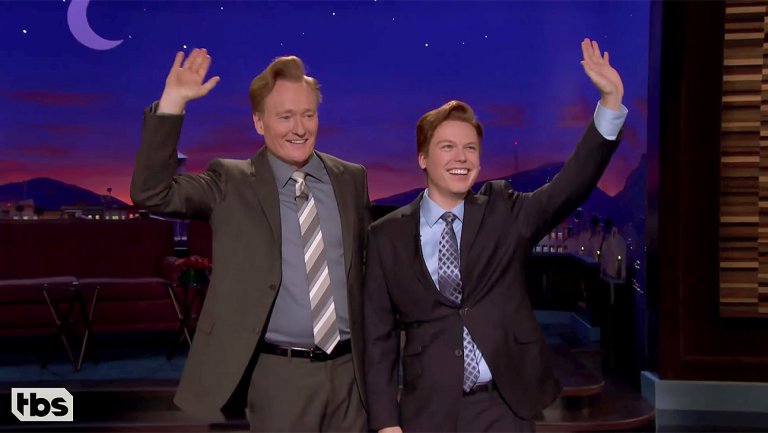 The late-night host teaches his production assistant how to be ready to "step in and be the next Conan O'Brien."

With 25 years of being a late-night host on his résumé, Conan O'Brien took a moment during his Wednesday night show to assess what it would be like if something were to happen to him.

"There's one problem nobody talks about: What if something were to happen to me? I know. Get upset. I live kind of a fast, dangerous life and I have a lot of enemies, so I could go at any time," O'Brien joked.

Hoping to find a younger replacement who would be ready to "step in and be the next Conan O'Brien," the late-night host assigned his production assistant, David Hopping, to be the one to take his place if needed. The pair then comically engaged in an intense training camp in which O'Brien evaluated everything needed to become his successor.

After answering O'Brien's medical assessment, Hopping was immediately given a makeover to emulate the late-night host, donning a suit and fluffed hair. "Are you excited to look this way, the rest of your life?" O'Brien jokingly asked him, only for Hopping to hesitantly agree.

O'Brien then introduced Hopping to various members of his team, jokingly teaching him the proper ways to interact with them, including screaming in their faces and demanding to know who is using the printer.

Prior to visiting the writing team, O'Brien informed Hopping that he usually kicks open the door and "make[s] lots of silly, over-the-top jokes about how horrible the writing's been lately, even when it's been good." After awkwardly joking with the team, Hopping comically yelled, "So long you pieces of shit" before proceeding to walk away with O'Brien.

O'Brien's main challenge for Hopping was to talk with Conan's associate producer, Jordan Schlansky. The host instructed Hopping to sweep all of Schlansky's paperwork piled up on his desk onto the floor and make a sarcastic joke prior to leaving. "If I had acid right now, I'd pour it in your eyes," Hopping told Schlansky.

For the final test, O'Brien gave Hopping a gun, explaining that the production assistant has to kill him. A confused Hopping immediately said no and looked horrified. O'Brien said, "Guess what? You just passed."