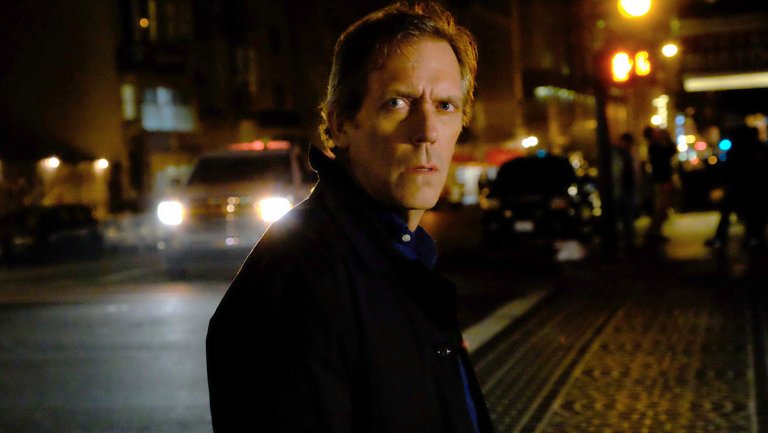 Critic's Notebook: No 'Chance' — How a Hulu Series Starring Hugh Laurie Disappeared Before Your Eyes

This is the day when the mystery ends.

Granted, it's not one you've really been paying attention to, but it's a head-scratcher nonetheless.

On Wednesday, what could arguably and convincingly be described as the poster series for Peak TV — Chance, on Hulu — bows out with its season finale.

And, in all likelihood, its series finale.

If you watched it, well, there weren't many like you. And if there were, everybody remained awfully silent.

Now, in 2017 it's not super difficult to have a series people have never heard of. That's the nature of Peak TV. There's so much of it — so relentlessly, endlessly much of it — that people not only can't watch all of it, they can't remember — or never even see the names of — the shows they are not watching.

It's a brutal environment. And yes, also thrilling — look at all the choices we've got! But in an era of too much choice and, specifically, too many good choices, things are going to get lost.

Was Chance the most lost?

First, it's important to put things in perspective. Every channel has a series people don't really watch or, if they do, don't really talk about. Lack of eyeballs, lack of buzz, forgetting to watch something (not to mention forgetting that it even exists) is pretty common now.

Hell, look at Netflix. Do the people who work there even know what they've bought or programmed? Shows can get lost there pretty quickly. And no doubt you've had someone say, "Hey, have you seen X? It's amazing!"

You don't even know where to find X.

When someone tells you, it turns out you've never even heard of the outlet.

Times are tough in TV Land.

But Chance is something different entirely. For starters, Hugh Laurie is the star. As a reminder, Hugh Laurie is a big deal. People love him. He does great work. It's not very often that he does something — for 20 episodes, over the course of two seasons — where people ignore that work or don't know that work exists.

Also, it's not like Hulu is a tiny streaming service. Smaller than Netflix, sure, but also a pretty big deal and very popular. People find shows there all the time. And this part is particularly important: Because it's not as enormous as Netflix and doesn't have nearly as many original series, it's harder to get lost on Hulu.

And yet, Hugh Laurie and Chance got lost.

The first season was mostly critically acclaimed — including from me. It wasn't super hard to sell, because there was that kind of funny part of the backstory: Laurie was playing a doctor, again — a specialist, in fact, and the series title came from the character's last name. Dr. Gregory House on the massively popular House, and Dr. Eldon Chance on the poster series for Peak TV, Chance. The characters diverged from their monosyllabic surnames after that, with Chance being about a troubled neuropsychiatrist — a fascinating field to write about — whose involvement with a troubled patient (played by Gretchen Mol) leads to a series of dangerous events fueled by bad decisions that spiral out of control.

There were other attributes to sell. Chance was based on the book by cult writer Kem Nunn (Tapping the Source, etc.), whose surf-noir style attracted an admirer in Deadwood creator David Milch, who tapped Nunn to write for the final season of Deadwood before Milch fatefully turned away from that project to develop, with Nunn, John from Cincinnati (also a series not many people watched, but for different reasons than Chance).

Mol was tasked with playing a character with a split personality and, for the most part, pulled that off with aplomb. The series, which had many good performances, got a truly great and sustained one from Ethan Suplee, playing an intriguing and violent man who helps Dr. Chance out of his many jams. The series was beautifully shot on location in San Francisco, a rarity, and the show got all of its local mentions right, a greater rarity.

That first season had an 81 percent fresh rating on Rotten Tomatoes and 64 rating ("generally favorable reviews") on Metacritic. Laurie was, as expected, mesmerizing throughout the season and Chance, despite a dark undertone and slower pace, finished strong. But after those initial reviews, and in the midst of Peak TV, it lacked buzz.

And then something truly odd happened as the second season kicked off. There was no Rotten Tomatoes "fresh" rating because, well, apparently not enough critics reviewed it. The same thing happened on Metacritic — where the site found exactly one who did.

Now, that's not always noteworthy — in the too-much-television landscape, many ongoing series don't get their second (or third, and so on) seasons reviewed. But generally not acclaimed shows with a big star on a popular streaming service that isn't overburdened with promoting other shows. (In fairness, two other Hulu series — The Path and Shut Eye — also didn't seem to pop with viewers, which is no indictment of Hulu, since there are myriad examples at every channel and not every show is going to be The Handmaid's Tale).

Chance, it seemed, lost its chance to stand out by season two, with a storm of other series not only preoccupying critics but taking up viewers' attention as well.

As a critic, I wonder about these kinds of shows a lot. I'm partly complicit in ignoring some of them. So I went back and finished the Chance episodes I hadn't seen in the first season and charged into the second as well (where the show takes a weirder, less believable turn, but also ups the pace considerably while Laurie and Suplee continue to shine).

And while it's certainly not accurate to judge a show's popularity based on its Twitter buzz, Chance definitely had none. Beyond that, nobody anywhere on any platform (or cocktail/dinner party) seemed to be talking about the series. For that matter, neither were its stars. After the initial round of promotion in 2016, Chance fell out of the zeitgeist — and Google — almost entirely.

Remember, too, that in the spring of 2016, loads of people were talking about Laurie in The Night Manager. Because that's generally what happens when you do excellent work — people get excited. But that didn't really ever materialize for Chance, which was too good in that first season to go by the wayside (and yes, you can say that about countless other series, a good number of those with famous leads as well).

But Chance is a series that seems entirely invisible. Like it either never entered anyone's brain, or bounced off and back out one of their ears if it temporarily did.

Hulu had already picked up Chance without a pilot and for a full two seasons. It was a series that ran its course, almost like a pre-ordained British short order, and then became mere content fodder for Hulu. It's there, on the shelf, if you will, ready to watch. Its fate is the same as so many others in the Peak TV era.

And yet, as a reminder, this is not history we're talking about here — Chance is still technically alive; it's still considered current programming.

It only seems long dead.