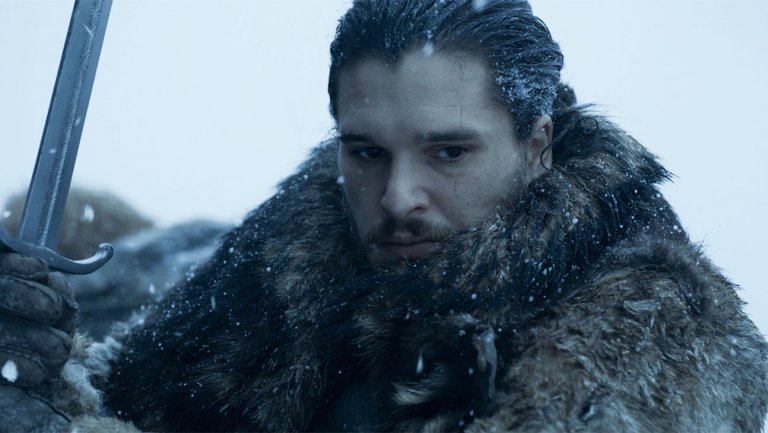 'Game of Thrones' Podcast: Jon Snow Weathers an Early Warning About His Future

This week's 'Winter Was Here' podcast focuses on season two, episode six, 'The Old Gods and the New.'

[This story contains spoilers through seven seasons of HBO's Game of Thrones.]

In the bitter cold north beyond the Wall, very early in the series, all things considered, Jon Snow (Kit Harington) bends the ear of a wise man who knows a thing or two about endless battles and manners of death: Qhorin Halfhand (Simon Armstrong), considered one of the most elite members of the Night's Watch, and someone with plenty of advice for the young man who will one day become the 998th Lord Commander of this sacred order.

"Your death will be a gift for people south of the Wall," Qhorin tells Lord Snow. "They'll be alive because some nameless bastard lived his life for theirs."

The conversation, which takes place in season two's sixth episode, "The Old Gods and the New," boasts similar shades of another far-north conversation Jon will have later in the series with Beric Dondarrion (Richard Dormer), in season seven's appropriately titled "Beyond the Wall" — both from an aesthetic point of view, but also philosophically, as they talk about their unyielding war against the dead.

Qhorin's words to Jon about dying as a nameless bastard for the men, women and children south of the Wall no longer feels like a likely prophecy, now that so many people across Westeros have heard tales about the bastard son of Eddard Stark who went on to lead the Night's Watch, die, come back to life, before becoming the King in the North. Jon's place in the history books feels cemented at this point, at least assuming humanity survives the war against the White Walkers.

With that said, there's one aspect of Jon's past that could very well remain unrevealed: his Targaryen heritage. While certain characters on the show are aware of Jon's true historical importance in the titular Game of Thrones, they are currently far from Jon's physical space, and in potential grave danger to boot, now that the Night King and his army have invaded the Seven Kingdoms; Winterfell looks like a very probably first stop on their destruction tour, which also happens to be the place where Jon Targaryen truthers Samwell Tarly (John Bradley) and Bran Stark (Isaac Hempstead Wright) currently reside.

Could Qhorin Halfhand's warning about Jon's fate end up being half-true? Is it possible that the HBO series will reach the end of the line without Jon or the rest of Westeros ever learning that he was the man who should have sat upon the Iron Throne based purely on birthright? It's one of the questions we're pondering this week on "Winter Was Here," the Game of Thrones rewatch podcast from THR and Post Show Recaps. In their discussion of "The Old Gods and the New," hosts Rob Cesternino and Josh Wigler also cover the following topics:

• How the episode deviously sets the stage for the Red Wedding;

• Some shame toward Tywin Lannister (Charles Dance) and especially Littlefinger (Aidan Gillen), both of whom should have recognized Arya Stark (Maisie Williams) at this point;

• Season two's final scene with a certain "Baratheon," which will end up mirroring her final appearance at the beginning of season six;

• The first appearance of Ygritte (Rose Leslie), one of the show's best (deceased) characters;